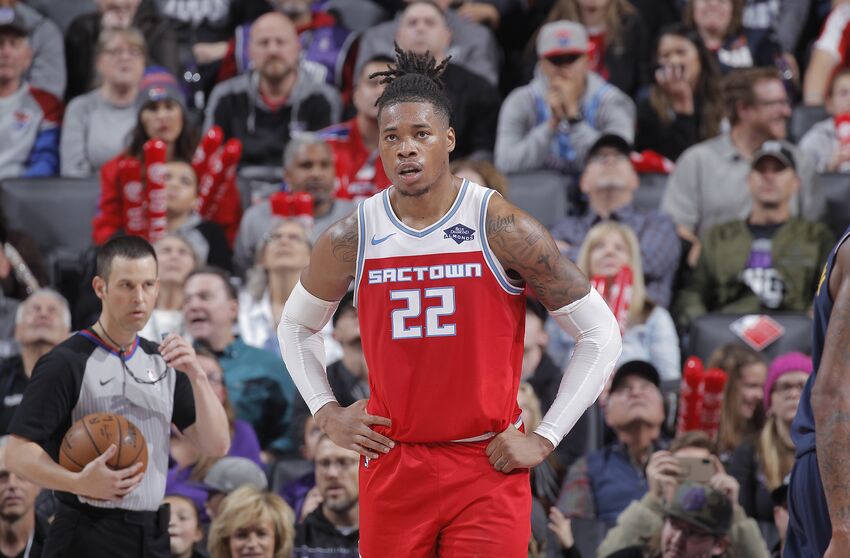 SACRAMENTO, CA - NOVEMBER 30: Richaun Holmes #22 of the Sacramento Kings looks on during the game against the Denver Nuggets on November 30, 2019 at Golden 1 Center in Sacramento, California. NOTE TO USER: User expressly acknowledges and agrees that, by downloading and or using this photograph, User is consenting to the terms and conditions of the Getty Images Agreement. Mandatory Copyright Notice: Copyright 2019 NBAE (Photo by Rocky Widner/NBAE via Getty Images)

Sacramento Kings starting center Richaun Holmes is making the positive impression that his predecessor never could.

On the final possession of Wednesday night’s game, with the Sacramento Kings leading 94-93 over the Thunder, Richaun Holmes did something legitimately special.

With a dribbling Chris Paul getting a screen from Steven Adams, the Kings were forced to switch, and Holmes was tasked with guarding one of the best mid-range shooters in NBA history, one on one, in a game-deciding possession. This is a near-impossible task for most big men in the NBA to do without giving up a bucket, or at the very least without fouling.

The defense from Richaun seals the W 🔥🔥🔥 pic.twitter.com/H6RcsJnNwM

Holmes guarded Paul exceptionally well, forcing Pau to shoot a difficult mid-range jumper that missed wide left. This play was just a microcosm of what Holmes has brought to the Kings in his first 24 games with the franchise. While his traditional box score stats are solid at 12.8 points per game, 8.5 rebounds, on 67% from the floor (2nd in the NBA), they don’t do Holmes justice.

Deeper In To The Numbers

As far as advanced stats go, Holmes has been one of the most efficient big men in the NBA this season. While this might sound like hyperbole, the numbers back it up.

Holmes is in the top three in both effective field goal percentage (67%), true shooting percentage (69.8%) and offensive rating (136.2) in the entire league.

Win shares is a stat that roughly estimates how many wins a player has contributed to his team. In this category, Holmes ranks ahead of guys like Kemba Walker, Devin Booker, and Pascal Siakam at 3.1 wins. Now, this isn’t to say Holmes is better than the aforementioned stars, but it shows the type of insane production Holmes is putting up.

An underrated aspect of being successful in the NBA is understanding your role within the team.

Holmes’s predecessor at the Kings’ starting center position, Willie Cauley-Stein, thought of himself in a similar vein to multi-faceted big men like Karl-Anthony Towns and Kristaps Porzingis:  taking a steady dose of ill-fated mid-range jumpers and post moves that could break the glass backboard. Cauley-Stein never wanted to just be a play finisher and rim protector. He wanted more. This led to a frustrating four-year tenure in Sacramento, where he displayed flashes of brilliance but never strung together more than a couple of weeks of consistent play at a time.

Holmes, on the other hand, has no quarrels about his role on the team, doing exactly what is asked of him within the Kings’ offense. Holmes’ shots come primarily as a roll man, garbage man, and from his awkward but effective push shot.  You won’t see Holmes throwing up 18 footers or trying to iso on his opponent for an entire possession.

Next: Kings Are In Good Shape For De'Aaron Fox's Return

It is unclear where the Kings would be at this point without Richaun Holmes. He has been the most consistent player on the roster and he always brings his lunch pail which something that all Kings fans can appreciate.